When Janice Greene addressed the group at Asbury UMC in Springfield on a Monday night in January, she started out by asking if anyone had done anything different since their last meeting. 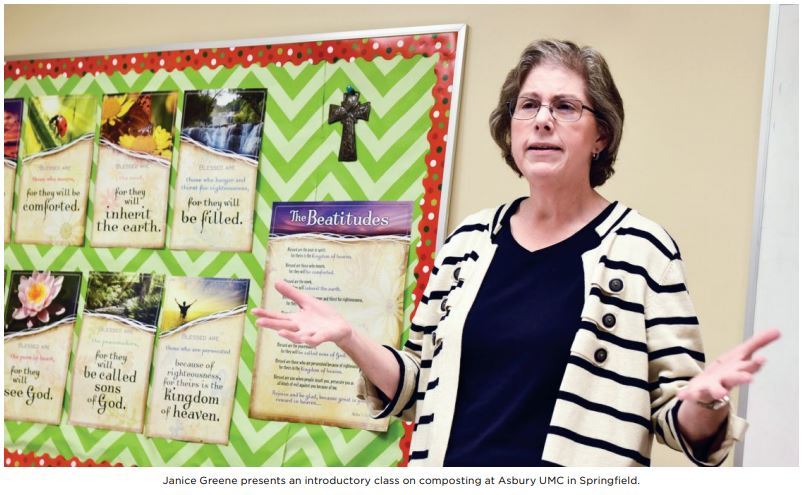 One person reported having switched from Styrofoam to paper plates. One person had quit using disposable plates completely. Another person said they were being more mindful about what they cook in order to reduce food waste. They all shared a lot of tips about things like where to take certain types of recycling and how to avoid single-use plastics.

Their new efforts were not only evident in their homes. Recycling containers are being added throughout Asbury, as well as composting bins.

Greene taught biology at the local university for most of her life. Now she’s using those same teaching skills to conduct classes at Asbury about taking care of the environment. She draws from scripture for her message of conservation.

“Jesus fed the multitude, and then collected what was left over so it wasn’t wasted,” Greene said. She then referred to Exodus 16: 11-21. “It tells how people were to gather what they needed – not what they wanted, but what they needed.” 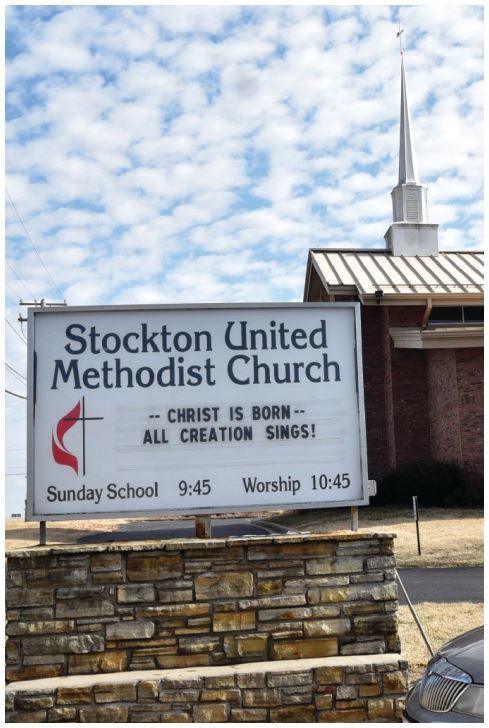 Greene found the interest in caring for the environment among the church members to be high enough to launch two groups. Both groups meet monthly, one on the fourth Monday the other on the fourth Thursday.

Last year, Greene and her friend Linda Chorice from The Downtown Church in Springfield went to the Earthkeepers training in Austin, Texas. The Global Ministries program equips United Methodists with skills to develop and grow environmental projects.

Participants receive in-person training on eco-theology, community organizing, project planning, anti-racism and United Methodist resources. The program has trained 200 United Methodists from 30 states to organize around environmental justice in their church and communities.

Chorice has been a United Methodist for a long time, but didn’t relate her two worlds of caring about the environment and being a Christian.

“I was excited to learn that the United Methodist Church has a statement on climate justice,” she said.

She found that with The Downtown Church being a new church, they can instill environmentally friendly practices easier than they might at an established church. But even in a new church it doesn’t necessarily come easy.

“It’s still hard to convince people not to use Styrofoam coffee cups,” she said. “I think people are hesitant to use a regular cup for coffee because they feel like it is creating work for whoever ends up washing it.”

When possible, Chorice goes for reusing rather than recycling.

“I think of recycling as the last possible thing to do,” she said.

The Downtown Church received a $1,000 grant from the Earthkeepers program to pay for a compost bin. The bin will be used by the church, people of the church and the community around the church.

The Springfield Compost Collective will empty the bin each week and weigh the compost so they know how much they are collecting.

“I thought having people bring their food scraps to church to drop off might be a hard sell with the pastor, but she was definitely on board from the beginning,” Chorice said. 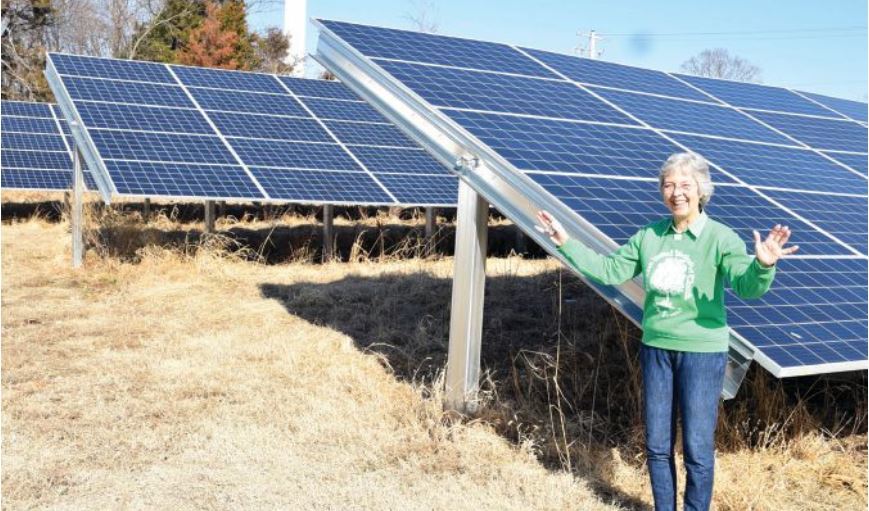 The Downtown Church is a perfect partner for the Compost Collective, as they had been looking for a location to place a bin downtown that would be a walkable distance from downtown apartments. It’s also a perfect fit for the church, whose mission is to be “… a place where Christ and the community intersects.”

When Chorice tells her friends about her church’s projects she is met with surprise.

“They say ‘What church do you go to?’” she said. “People don’t equate church with caring for the environment or sustainability.”

The first meeting of the “Green Team” at The Downtown Church happened after worship on Jan. 26. There were 20 people of various ages and backgrounds in attendance, they decided to divide up and work on specific areas of interest. Chorice plans on offering some classes at the church. Having recently retired from a career with the Missouri Department of Conversation’s Outreach and Education division, she’s well equipped to do so.

Chorice and Greene were the only two people in Missouri to complete the GBGM training last year. The only other person to be commissioned in Missouri is Cheryl Marcum at Stockton UMC. If you see Marcum driving around Stockton, ask her for a ride. She’ll probably reply with an enthusiastic “Yes, and then tell you, “We’re riding on sunshine.”

Marcum drives a Chevy Volt, a Plugin Hybrid Vehicle. She charges it at her home in Stockton, where her solar panels generate more than enough energy to charge her car, power everything in her home, and have power left over to go back on the grid. Powering her home with solar comes easy – because every aspect of the home was designed and built to be as energy efficient as possible. Being good to the world we live pervades all aspects of Marcum’s life, so she was particularly excited a few years ago when her spiritual life and her passion for taking care of the planet were able to officially merge.

“I felt as though my denomination was finally acknowledging my calling,” she said. 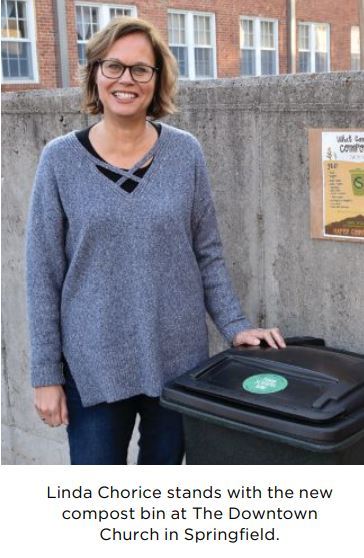 Marcum trained as an Earthkeeper in 2017 and was commissioned in 2018, but caring for the environment as a ministry began long before that for her. Marcum started leading a creation care group in her church in 2012, and it became officially endorsed by the church council in 2014. During their first meeting they started writing down ideas on a roll of butcher paper.

“The final list stretched from the ceiling to the floor,” Marcum said. The group settled on three components:

When you enter Stockton UMC it is evident that someone is looking out for environmental concerns. Most light switches are labeled with reminders to turn them off when not in use. Lights are gradually being changed over to LED. There is a recycling and repurposing center.

But the bigger impact is the way the ministry has spilled over into the community.

One member of the Go Green Team is a manager at the local food pantry. The pantry is nearly wastefree now, with expired food going to a local person who uses it to feed her chickens. Children at the local school sold water bottles to replace single-use plastic bottles and raised enough money to fund the

installation of a water fountain that has a bottle filler. The recycling center at the church has a magazine swap area, magazines are also bundled and sold at the church rummage sale.

Large, padded mailing envelopes are also left there for reuse. The team published a guide to recycling and reusing in Stockton. This year marked the 50th year of the town’s Black Walnut Festival, the team from the church decided to take on recycling for the festival.

During the last two electronics drives in Stockton they filled two 70-foot semitrailers.

The mayor of Stockton would like to see the entire town powered by solar. That’s not happening anytime soon, but Marcum did work to obtain solar panels that are installed near each of the town’s water towers to provide electricity to run the pumps. When the loans for the solar panels are repaid, people’s water bills will be cheaper because of the system.

“When you read Genesis, the first job God gives us is to care for his creation,” Marcum said.

Applications for the 2020 EarthKeepers program will open in March. Visit www.umcmission.org/ earthkeepers to learn more or contact Alicia Stromberg at astromberg@umcmission.org

Are you recycling or wish-cycling? Yakima recycling volunteers share stories